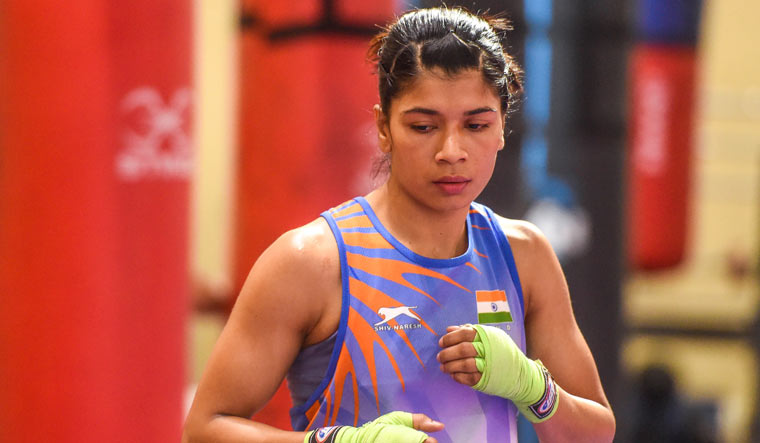 In the penultimate fight of the day, Sagar earned a unanimous 5-0 win over Ifeanyi Onyekwere of Nigeria to reach the gold medal match.

Nitu Ghanghas (48kg) also stayed on course for the gold medal in her maiden appearance.

But another debutant, Jaismine Lamboria (60kg), had to content herself with a bronze when she fell to England’s Gemma Paige Richardson via a 2-3 split verdict.

Rohit Tokas also claimed a bronze medal in the men’s welterweight class after losing to Zambia’s Stephen Zimba in the semi-final via split decision.

Before that, Mohammed Hussamuddin of India also settled for a bronze after losing the men’s 57kg category semi-final against Joseph Commey of Ghana 1-4.

Nikhat started the semi-final confidently and dominated all three rounds to emerge the winner in the lopsided fight.

Unsurprisingly, the 26-year-old Indian was in the lead after the first round with all five judges ruling in her favour, and she followed a similar line in the next two rounds.

Panghal, who is in the running to win the yellow metal after his silver in the last edition, came from behind to beat an aggressive Patrick Chinyemba of Zambia with a 5-0 unanimous decision win.

Nitu, on the other hand, prevailed over Canadian Priyanka Dhillon by earning a victory in the RSC (Referee Stops Contest) in the minimum weight class.

Such was the confidence of the 21-year-old Nitu that he played wide guard, inviting his opponent to strike while using his straight jabs and combination punches to great effect. In the end, the referee had to end the contest.

In search of their inaugural gold medals, both boxers will have to overcome local challengers in Kiaran Macdonald (men’s fly) and Demie-Jade Resztan (women’s minimum) in their respective finals on Sunday.

“I know it would be difficult, there would be big applause for him, but I have to stay focused. I can’t let it go this time,” determined Panghal, who lost to another Briton and Tokyo Olympic champion in Galal Yafai in 2018, told PTI.

Panghal, 26, was left behind as his younger, more aggressive opponent unleashed a barrage of punches on the world championship silver medalist.

Trailing 2-3 after the start, Panghal, who was looking to put the specter of the Tokyo Olympics behind him, where he made a first-round start, had to dig deeper into his experience pool. The Asian Games champion upped the ante, landing hooks and jabs at will to take the round.

The final three minutes were hotly contested with both fighters trying to make an impression, but four of the judges ruled in favor of Panghal.

“He was aggressive up front and I had to give it my all and used all my experiences to recover in the last two rounds. I hope to get a gold this time,” Panghal said.