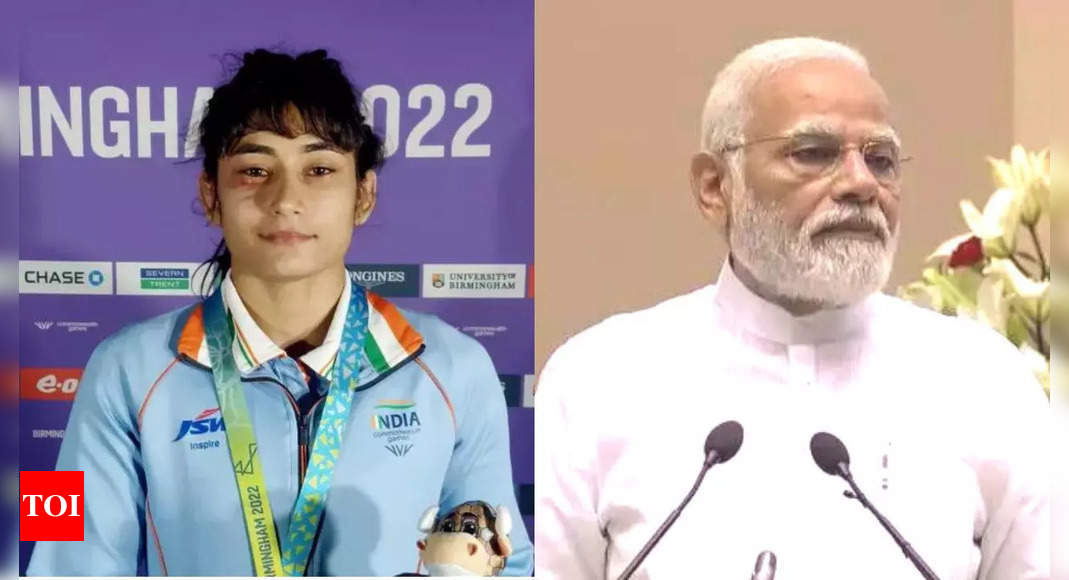 NEW DELHI: A gesture by Prime Minister Narendra Modi, who told a heartbroken athlete, Pooja Gehlot, that her bronze medal at the Commonwealth Games called for a celebration and not an apology earned him praise on social media, as users around the world praised his inspiring leadership.
People in countries like Pakistan praised Modi’s motivating gesture and questioned the apathy of their own rulers, who may not have even realized the athletes were winning medals.
In the semi-finals of women’s 50kg wrestling at the ongoing Commonwealth Games in Birmingham, Gehlot fought hard but was unable to win the match. At a post-match press conference, she made no attempt to hide her disappointment.
A teary-eyed Gehlot told reporters that she fervently wanted the national anthem to be played after her win at the event, but could only get a bronze.
Noting the athlete’s disappointment in a video tweeted by AND MEPrime Minister Narendra Modi stepped in to comfort and encourage her.
“Pooja, your medal calls for celebrations, not an apology. Your life’s journey motivates us, your success makes us happy. You are destined for great things ahead…keep shining!” the prime minister said in a post.
The response soon went viral, as many others also posted words of encouragement for the emotional athlete. Many more, however, praised Modi’s gesture of support.
One of the first reactions came from a Pakistani journalist. Shiraz Hassan who compared Modi’s style with the attitude of the leaders of the neighboring country.
“This is how India projects its athletes. Pooja Gehlot won the bronze and expressed regret that she couldn’t win the gold medal, and PM Modi replied to her. Did you ever see that message from the PM or the president of Pakistan? Do they even know that Pakistani athletes are winning medals?” hassan tweeted?
Another netizen referred to the tweet and said that this was the precise reason why “Modi is the best”.
“When the PM himself motivates and encourages you… Respect. We are proud of you Pooja Gehlot,” said a Twitter user named Gautam Anand.
Another user, Tarangini Das, said it was gestures like these that set Modi apart from all other leaders.
“This is what makes PM Modi different from all the other PMs we have ever had. He is with our athletes like no one has ever done. We are proud of Pooja Gehlot. Even participating and training for such tough games is an achievement. You have won the bronze It is a great success”, said the user.
Another netizen said that regardless of a person’s political views, the gesture should be respected. “A person’s political views may differ, but this gesture deserves appreciation,” he posted.
Many of the users compared Modi’s leadership style to that of the head of the family or father figure who takes care of each member. Prime Minister Modi has always taken a keen interest in Indian athletes, many of whom he keeps in regular contact with.
India’s wrestling contingent finished their Birmingham 2022 Commonwealth Games campaign with all twelve wrestlers winning medals. It was one of the best performances of the fighters in the games.
Indian wrestler Pooja Gehlot won bronze in the women’s 50kg at the Commonwealth Games. She defeated Christine Lemofack Letchidjio of Scotland at Coventry Arena Wrestling Mat B on Saturday.
Pooja Gehlot won the bronze medal match 12-2 and won on the basis of technical superiority. The match lasted three minutes and forty-nine seconds. The Indian fighter took a 10-2 lead in the first period and the pressure was on her opponent. Gehlot was in good form in the match. She managed to fight back and held off her opponent to walk away with the bronze.