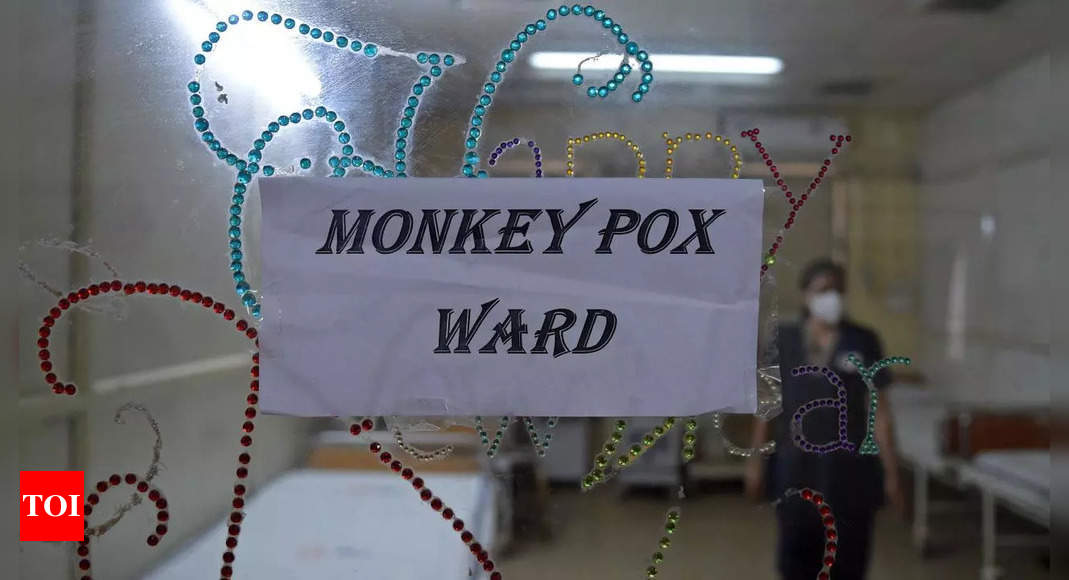 NEW DELHI: India has so far reported a total of eight cases of monkey pox and a related death. A national task force has been established to monitor the development of diagnostics and vaccines.
Monkeypox is a zoonotic disease caused by a virus, which belongs to the same family of viruses that causes smallpox. The disease is endemic in regions such as West and Central Africa, but cases have recently been reported in non-endemic countries as well, according to the WHO.
Monkeypox usually manifests with fever, rash, and swollen lymph nodes and can lead to a variety of medical complications. It is usually a self-limited illness with symptoms lasting two to four weeks.

Monkeypox: things you should know

Third case in Delhi
Delhi today reported another case of monkeypox, the third case of the viral disease in the national capital so far. A 35-year-old man of African origin tested positive a day after a 35-year-old Nigerian did.
Both positive cases are admitted to the government-run LNJP Hospital in Delhi, the main hospital for treating the infection.
The first case from Delhi, a man in his 30s, was discharged from Maulana Azad Medical College Hospital on Monday. He had reportedly attended a stag party recently in Manali, Himachal Pradesh, before testing positive for Monkeypox.

Fifth case in Kerala
A 30-year-old man, who arrived in Kerala from the United Arab Emirates last month, tested positive for Monkeypox today, making it the fifth case of the virus in the southern state.
The first case of monkeypox was reported in Kollam district on July 14 and the patient was discharged from hospital last week. The second confirmed case of the infection was reported in Kannur district on July 18, and the third case was reported in neighboring Malappuram on July 22.
Meanwhile, a 22-year-old man from Kerala died on July 30 due to monkeypox, making it the first such death in the country and in Asia.
Of the eight cases detected in India, five have a history of foreign travel, the Minister of Health and Family Welfare said.

India warns against boarding UAE passengers with symptoms
Referring to three cases where the passengers had come to India from the United Arab Emirates, the Union Ministry of Health has written to the WHO representative in the United Arab Emirates to ensure that passengers showing symptoms suggestive of monkeypox are not allowed to board flights to minimize the risk of transmission of the disease.
Under Article 18 of the 2005 International Health Regulations (IHR), WHO member states must take exit control measures at points of entry and, if necessary, impose restrictions on people from affected areas in response to a public health emergency of international concern.

Health Minister says work is underway to develop test kits and vaccines
Union Health Minister Mansukh Mandaviya said a national task force has been established to monitor the development of diagnostics and vaccines.
The Indian Council of Medical Research (ICMR) has successfully isolated the monkeypox virus and interest has been expressed for research institutions, vaccine and diagnostic kit manufacturers in India to take the strain of the virus to further research and develop a vaccine in the country. reported to Rajya Sabha.

CEO Adar Poonawalla says SII is conducting research to find a vaccine
Serum Institute of India CEO Adar Poonawalla said on Tuesday that his company is conducting research to find a monkeypox vaccine as cases rise in the country. Poonawalla was reported to have briefed Union Health Minister Mansukh Mandaviya on the matter during a meeting at Nirman Bhawan on Tuesday.
based in Pune National Institute of Virology (NIV), which is under the Indian Council of Medical Research (ICMR), has already isolated the monkeypox virus from a patient’s clinical sample.
All 15 samples from Maharashtra test negative
All 15 suspected monkeypox samples from Maharashtra have tested negative for the viral disease, a senior health department official said here on Tuesday. The samples were tested at the National Institute of Virology, Pune and the Kasturba Hospital in Mumbai, he added.

Uttarakhand on alert
The Uttarakhand Department of Health has issued a notice to all district magistrates and medical directors in the state regarding monkeypox. The Director of the National Health Mission, R Rajesh Kumar, issued orders instructing officials to strictly monitor the situation, strengthen surveillance and keep the health system in alert mode.
To date, no case of monkeypox has been reported in Uttarakhand, however this advisory is being issued as a precautionary measure by the Secretary, Ministry of Health and Family Welfare, Government of India.
(With agency supplies)