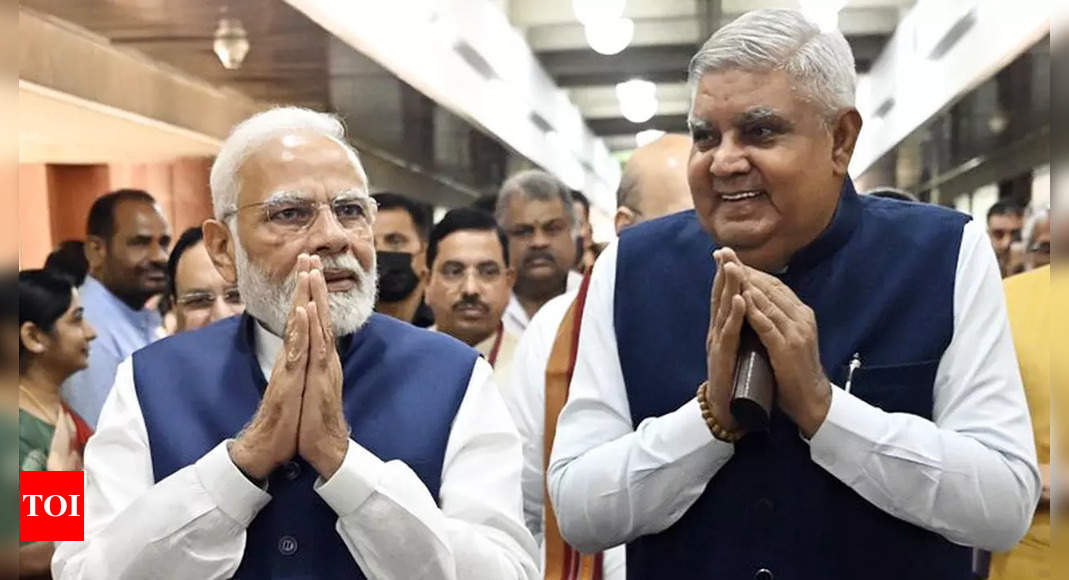 NEW DELHI: NDA candidate and former Governor of West Bengal Jagdeep Dhankhar He comfortably won Saturday’s vice-presidential election with nearly 500 votes, beating opposition-backed candidate Margaret Alva, who received fewer than 200 votes.
Dhankhar, who will also serve as president of the Rajya Sabha, will succeed incumbent M Venkaiah Naidu, whose term ends on August 10.
As many as 725 MPs, including Prime Minister Narendra Modi and former Prime Minister Manmohan Singh, cast their votes today in the election for the country’s second highest constitutional office.
About 93 percent of the polls were registered, with more than 50 deputies who did not exercise their right to vote.
While Modi and his predecessor Manmohan cast their votes earlier in the day, opposition leaders Sonia Gandhi and Rahul Gandhi voted a little after noon.
The Trinamool Congress, which has 39 MPs, including 23 in the Lok Sabha, had already announced its decision to abstain from the elections. However, two of his MPs, Sisir Kumar Adhikari and Dibyendu Adhikari, broke ranks and cast their votes.
Home Minister Amit Shah, Defense Minister Rajnath Singh, BJP Chairman JP Nadda, Education Minister Dharmendra Pradhan and Commerce Minister and Rajya Sabha House Leader Piyush Goyal met were among the leaders who showed up early at Parliament House.

Who is Jagdeep Dhankhar?
Dhankhar, a native of Rajasthan, is the former Governor of West Bengal and was often in the news for his clashes with the Mamata Banerjee dispensation and her party, the Trinamool Congress.
Born on May 18, 1951 in the Kithana village of the Jhunjhunu district of the state, he completed his school education at the Sainik School in Chittorgarh.
He went on to study Physics at the University of Rajasthan and also completed his LLB at the same university.
Dhankhar then practiced law in the Rajasthan High Court and the Supreme Court.
He entered politics in 1989 and was elected to the Jhunjhunu Lok Sabha of Rajasthan the same year.
Later, he served as minister of state for parliamentary affairs in the Janata Dal government led by Chandra Shekhar.
From 1993 to 1998, Dhankhar represented the Kishangarh constituency of Ajmer district in the Rajasthan assembly.
He belongs to the Jat community and is ready to be sworn in as the first OBC. Vice president from India.
(With contributions from agencies)