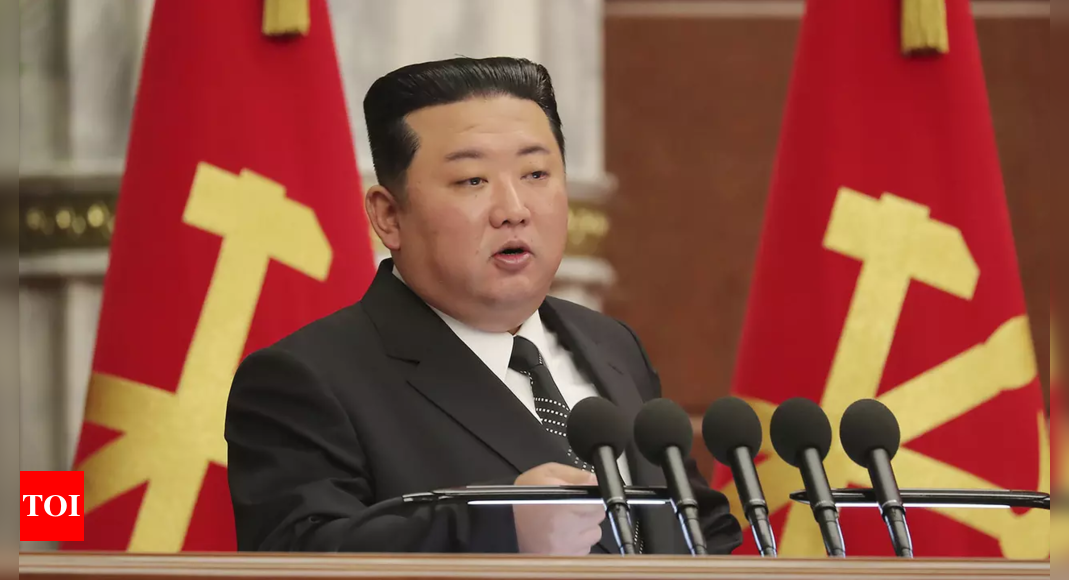 SEOUL: North Korea fired a ballistic missile on Sunday, Seoul’s military said, just days after a US aircraft carrier arrived for joint exercises with the South in a show of force against Pyongyang.
With talks long stalled, nuclear-armed North Korea has doubled down on its banned weapons programs, even revamping its laws earlier this month to declare itself an “irreversible” nuclear power.
Sunday’s launch is the latest in a series of unprecedented weapons tests by Pyongyang so far this year, including launching an intercontinental ballistic missile at full speed for the first time since 2017.
South of the border, hardline new President Yoon Suk-yeol, who during the election campaign vowed to be tough on North Korean leader Kim Jong Un, has stepped up joint South Korean drills with its key ally on Security, United States.
Seoul’s military “detected a short-range missile fired by North Korea at 6:53 am today around Taechon in North Pyongan province into the East Sea,” the Joint Chiefs of Staff (JCS) said.
The missile flew around 600 kilometers (373 miles) at an altitude of around 60 kilometers, with a maximum speed of around Mach 5, the JCS added in a statement.
“Our military maintains a posture of full readiness and is cooperating closely with the United States as it strengthens surveillance and surveillance,” he said.
Japan’s coast guard issued a warning to ships after the launch, and Tokyo Defense Minister Yasukazu Hamada said the missile landed outside Japan’s Exclusive Economic Zone.
“North Korea’s repeated ballistic missile launches are absolutely inexcusable and the remarkable improvement in its missile technology is something we cannot ignore,” Hamada said.
South Korean President Yoon, who took office in May, has vowed to step up joint military exercises with the United States after years of failed diplomacy with North Korea under his predecessor.
On Friday, the nuclear-powered USS Ronald Reagan and ships from its strike group docked in the southern port city of Busan, as part of a push by Seoul and Washington to have more US strategic assets operating in the region.
Yoon will also meet with US Vice President Kamala Harris on Thursday when she visits Seoul this week, following a trip by President Joe Biden in May and US House Speaker Nancy Pelosi, last month.
“The timing of this latest test falls between the arrival of the USS Ronald Reagan this week and Vice President Harris’s visit to Seoul next week,” Soo Kim, an analyst at the RAND Corporation, told AFP.
“It’s North Korea’s way of showing its defiance of the alliance and injecting itself at the right time.”
The USS Reagan will participate this month in joint exercises off the east coast of South Korea.
Washington is Seoul’s key security ally and has some 28,500 troops in South Korea to protect it from the North.
The two countries have long held joint exercises, which they insist are purely defensive, but North Korea sees as rehearsals for an invasion.
“Pyongyang could be putting on a show of force while a US aircraft carrier visits South Korea for defense exercises,” said Leif-Eric Easley, a professor at Ewha University in Seoul.
“But North Korea’s major tests are, above all, part of a long-term campaign to improve offensive military capabilities.”
South Korean and US officials have been warning for months that Kim is preparing to conduct another nuclear test.
Seoul also detected signs that the North was preparing to fire a submarine-launched ballistic missile (SLBM), the president’s office said on Saturday, a weapon Pyongyang last tested in May.
The isolated regime has tested nuclear weapons six times since 2006. The last and most powerful in 2017, which Pyongyang claimed was a hydrogen bomb, had an estimated yield of 250 kilotons.
“North Korea may be delaying its seventh nuclear test out of respect for China’s upcoming political conference where Xi Jinping is strictly planning to extend his leadership,” Easley said.
“But there are limits to Pyongyang’s self-control.”