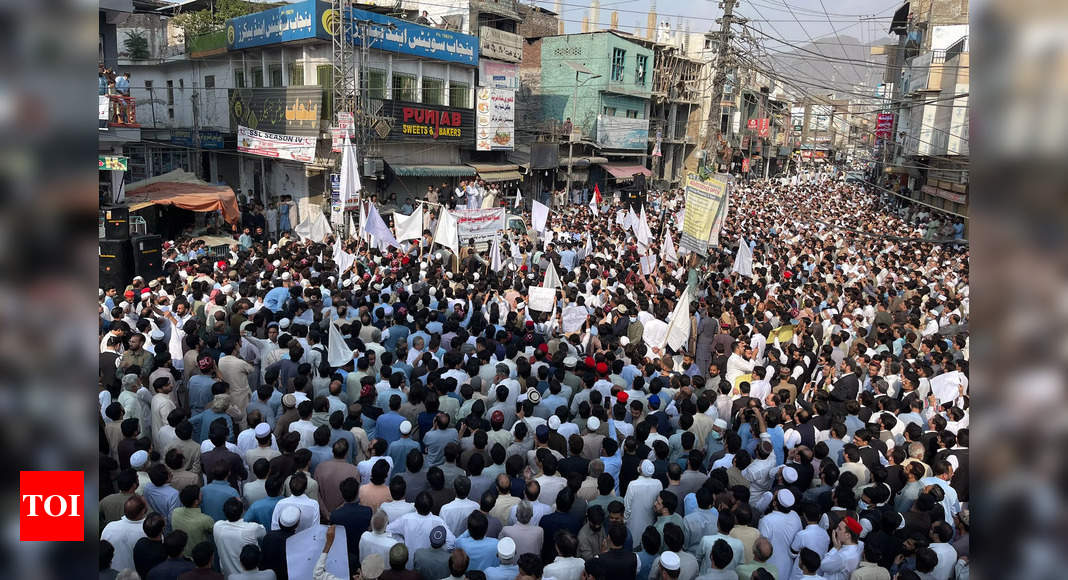 MONGORA: A lawmaker in Pakistan’s rugged northwest was having tea with voters when his phone rang: the Taliban were calling asking for “donations.”
“We hope you won’t be disappointed,” read the chilling text from a shady go-between for the Islamists’ Pakistani chapter, known as Tehreek-e-Taliban Pakistan (TTP).
A second message appeared on the screen: “Refusal to provide financial support will make you a problem,” he warned.
“We think a wise man will understand what we mean by that.”
After the Taliban seized power in neighboring Afghanistan, TTP organized crime has infested Pakistan’s border areas, locals say, with the group emboldened by the success of its sister movement.
Since July, the provincial legislator, who asked to remain anonymous, has been intimidated into sending TTP sums totaling 1.2 million rupees (more than $5,000).
“Those who don’t pay have to face the consequences. Sometimes they throw a grenade at their door. Sometimes they shoot,” he told AFP.
“Most of the elites pay the extortion money. Some pay more, some pay less. But nobody talks about it.
“Everybody fears for his life.”
The TTP shares a lineage with the Afghan Taliban but was most powerful between 2007 and 2009, when it broke out of the jagged belt that divides Pakistan and Afghanistan and invaded the Swat Valley, just 140 kilometers (85 miles) north of Islamabad.
The Pakistani army hit hard in 2014 after militants raided a school for the children of members of the army, killing nearly 150 people, mostly students.
The TTP was largely defeated and its fighters fled to Afghanistan, where they were pursued by US-led forces.
With Afghanistan back under Taliban rule, it has become an “open haven” for the TTP, according to Imtiaz Gul, an analyst at the Islamabad Center for Security Research and Studies.
“Now they have freedom of action while living in Afghanistan,” he said.
“That’s a simple explanation for why TTP attacks increased.”
In the year since the return of the Taliban, militant activity in Pakistan has skyrocketed, according to the Pak Institute for Peace Studies, with around 433 people killed.
“They started the same old game: targeted killings, bomb blasts, kidnappings and extortion,” said Ahmad Shah, a community activist from Swat.
The blackmail network finances the TTP, but also sows a crisis of confidence in the local government that the militants seek to usurp in favor of the Islamist government.
Provincial MP Nisar Mohmand estimates that 80 to 95 percent of well-to-do residents in surrounding districts are now victims of blackmail.
Fellow lawmakers have been attacked for refusing to pay, and some are too afraid to visit their precincts.
“They have their own reward and punishment system,” Mohmand said. “They have set up an alternative government, so how are the people supposed to resist?”
The Afghan Taliban have longstanding differences with their Pakistani counterparts, and since capturing Kabul they have vowed not to host international jihadist groups.
But the first telltale sign of a TTP blackmail attempt is the phone number, which begins with the international code +93 indicating an Afghan SIM card.
Then comes a suggestive text or voice message in Pashto, spoken with a Pakistani accent.
AFP heard a message threatening to send an “action squad” to a landlord if he refused to pay.
“The days of cruelty are near. Do not think that we are a spent force,” he warns.
The sum “due” is then settled, usually through an intermediary, before being sent to the ragged gangs of TTP fighters whose silhouettes lurk on the mountain slopes.
Victims expect to be “operated” up to five times a year, said the anonymous parliamentarian.
Since the 2014 school massacre, which horrified Pakistanis who were even marginally sympathetic to its cause, the TTP has been committed to avoiding civilian targets and claims that extortion is carried out by criminals who borrow its brand.
But a civilian intelligence officer in the area insisted that they were “the root cause of the threat.”
Swat, a snow-capped mountain valley bisected by turquoise waters, is one of Pakistan’s most famous beauty spots, but its reputation has a dark side.
In 2012, 15-year-old Malala Yousafzai was shot in the head by the TTP while campaigning for girls’ education, a campaign that later won her the Nobel Peace Prize.
This summer things seemed to have gone hopelessly backwards towards those dark days.
After a decade-long hiatus, the anonymous MP began receiving blackmail text messages once again.
“The situation was so bad that a lot of people were thinking about migrating,” Shah said. “Life was paralyzed.”
But there has been resistance and several protests against the TTP since the group’s kidnapping of three officials in August.
Businesses closed and thousands took to the streets in demonstrations across the valley.
The Pakistan Army claimed that reports of strong TTP in the area were “grossly exaggerated and misleading”.
Still, in Pakistan’s border areas, attacks and extortion continue unchecked, despite an alleged negotiated truce between the TTP and Islamabad.
The return of the Taliban to Kabul, despite having been battered for 20 years by the world’s most powerful armies, shows that military might will not end the ordeal.
“We have to find a solution that is acceptable to both sides,” said government negotiator Muhammad Ali Saif.
“A lasting agreement will have to be found.”

India will not be an ally of US, it will be another great power: WH official