Rajya Sabha has right to pass, reject, tweak bills, but not to stall them: PM Modi | India News 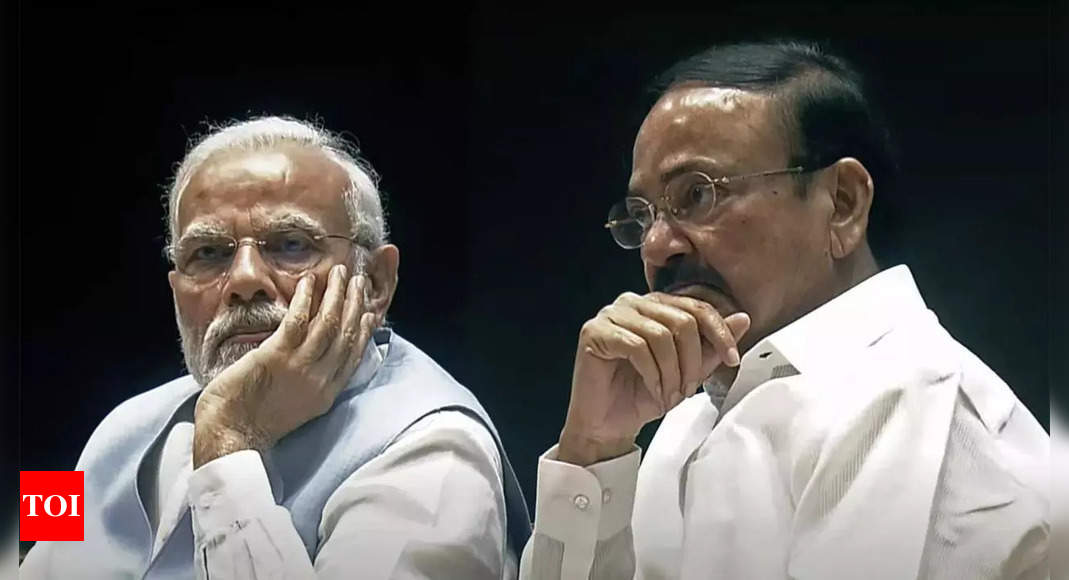 NEW DELHI: Targeting opposition parties by paralyzing legislative affairs in Rajya SabhaPrime Minister Narendra Modi said on Monday that the upper house has every right to pass, reject or amend bills referred to it by the Lok Sabha, but parliamentary democracy does not allow them to be stopped or blocked.
While delivering his farewell address to the outgoing Vice President and President of the Rajya Sabha, M Venkaiah Naidu, the prime minister said: “This House certainly has the right to agree or disagree with the bills that are referred from the other House. The House can approve, reject or amend them. But our democracy does not foresee the impasse of the bills received from the other House”. House: “The prime minister said he hoped the House would function responsibly to the nation, carrying forward Naidu’s legacy.
The prime minister recalled how Naidu used to tell both the treasury and the opposition benches to “let the government propose, let the opposition oppose and let the House dispose.”
“Previously, it was understood that if there were interruptions during the discussion, then the proceedings of the House were adjourned,” the prime minister said, praising Naidu for having bucked the trend by maintaining dialogue and keeping channels of communication open, which it had helped increase the productivity of the House by 70% and helped pass or discuss 171 bills. “You always emphasized disruption beyond a certain limit as contempt. I see the maturity of democracy in its standards,” the prime minister said of Naidu.
Saying that India is in a new era as it embarks on its next 25-year journey, Modi noted that this year’s Independence Day will be celebrated with the President, Vice President, Lok Sabha President and the Prime Minister born in independent India. “And each one of them comes from very humble backgrounds. This has great symbolic value and is a glimpse of a new era.”
Modi said that as president, Naidu always encouraged young lawmakers and promoted the use of mother tongue, giving members the opportunity to speak in 22 scheduled languages. The prime minister praised Naidu for his wit and said there were no “counterparts” to his one-liners. “Your one-liners from him are also witty and winning… There is nothing left to say after that. Every single word of his is heard, preferred, revered and never countered,” Modi said in his speech.
Modi also spoke about Naidu’s political journey from Andhra Pradesh and that too at a time when people felt there was no immediate hope for the ideology he followed. But due to conviction and hard work, he progressed to become the national president of BJP and held different positions in the government before becoming vice president.

Read More: Rajya Sabha has right to pass, reject, tweak bills, but not to stall them: PM Modi | India News