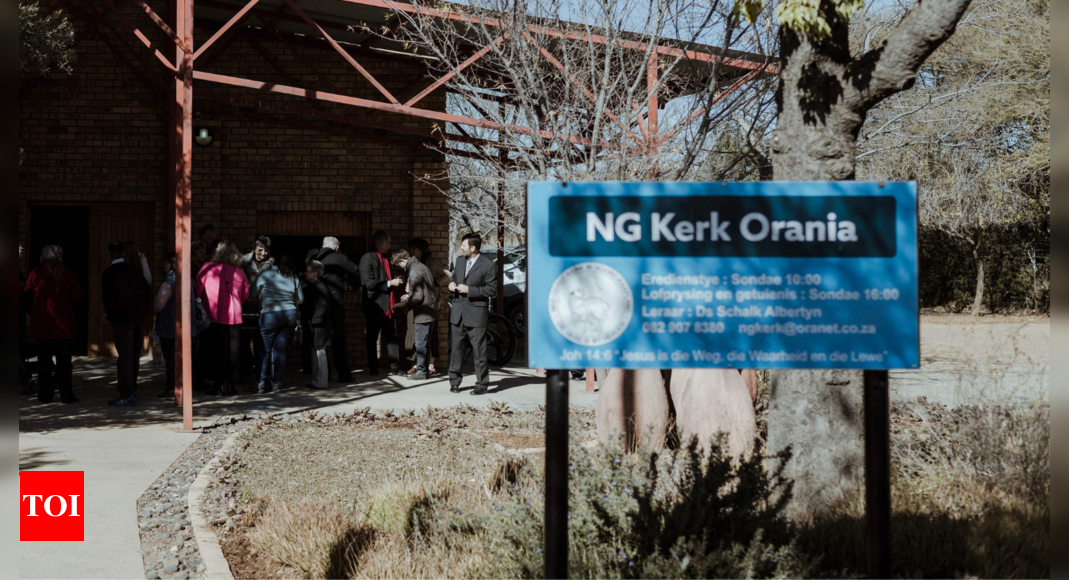 ORANIA, SOUTH AFRICA: From a distance, Orania it looks like any other small town in rural South Africa.
But once inside, the visitor is struck by an obvious difference.
Everyone here is white.
And in a country where menial work in wealthy areas is usually done by black employees, white people clean supermarket floors, use leaf blowers, and harvest the nuts on walnut farms.
Orania residents are 100 percent white in a country that has declared the end of racial segregation.
The history of this inconsistency goes back to 1991, when apartheid was dying.
White Afrikaners, descendants of 17th-century Dutch settlers, bought 8,000 hectares (19,000 acres) of land along the Orange River in the sparsely populated Karoo region.
Using autonomous status under the post-apartheid constitution, they created a privately owned city that has so far admitted only white inhabitants.
Today, Orania’s population has increased almost 10-fold to around 2,500, and the economy is booming.
Old Cape Dutch-style houses rub shoulders with modern row houses, separated by low walls or no walls, but with manicured gardens. Children ride bicycles and adults jog freely on the clean streets.
Small orange, white and blue flags, the colors of South Africa under apartheid, flutter in the afternoon wind at construction sites.
Sensitive to accusations of racism, residents insist they are not nostalgic for the apartheid era, but a community seeking “freedom with responsibility.”
This means, in his view, a community running its own business, away from crime, power cuts, dysfunctional local government and other problems that plague South Africa today.
“People look at Orania and maybe they see there are no black workers … and their first thought is ‘wow, these guys must be racist,’ that’s not exactly the case,” said Wynand Boshoff, 52, a resident. pioneer.
In wealthy suburbs in other parts of South Africa, blue-collar jobs are performed almost exclusively by black workers.
But Orania says he has broken with apartheid- and colonial-era labor practices.
“We do our own work, from gardening to cleaning our houses, to our own toilets, to construction, everything,” spokesman Joost Strydom said.
Orania, he said, is the only community that avoids “the cheap black labor system.”
Under the South African constitution, Orania has the right to self-determination and operates autonomously from the central government.
It has its own currency, the ora, pegged one to one to the rand.
The city is also seeking energy independence through solar power, in a country largely fueled by coal and mired in a deep energy crisis.
Prospective residents are screened and must not have a criminal record.
“It’s like getting married,” said Strydom, a 28-year-old from the southeastern province of KwaZulu-Natal.
Aspiring residents must “share the values ​​and subscribe” to the city’s goals, he said, insisting that Orania was not “racist” or a “desperate clinging to apartheid.”
Boshoff said there was nothing to stop non-white Afrikaners from applying, just that no one ever did.
“We haven’t found anyone,” he said.
Orania’s population has grown as much as 17 percent annually in recent years, and by 2021 new business creation was up a quarter, Strydom said. Tourism is one of the main economic activities, attracting an average of 10,000 visitors a year.
“All of a sudden, other communities are saying ‘how can we learn from you?'” he said.
When AFP journalists were in Orania recently, some traditional royal emissaries from the Xhosa and Tswana ethnic groups were in town on a “diplomatic” visit.
“It was important for me to go… Whether it’s right or wrong, there’s a success story somewhere,” said Gaboilelwe Moroka, a 40-year-old chief of the Barolong Boo Seleka, part of the Tswana ethnic group in neighboring Free. State province.
“It’s unfortunate that these things are too politicized,” he said.
Boshoff, the grandson of apartheid architect Hendrik Verwoerd, argued that Afrikaners created Orania because they needed a place to call home.
“Each African tribe or clan has their own place that they use as a reference point,” said Boshoff, who is also a right-wing lawmaker in the national parliament.
Orania has “become part of the South African landscape,” he said, after delivering a Sunday morning sermon at a Dutch Reformed church.
Private towns like Orania are not unusual, said Sandile Swana, an expert on municipal governance.
“You’re going to see more of these,” Swana said.
“The only difference with Orania is that they have chosen their own ethnicity and culture” as a precondition.
Another Afrikaner-only city, Kleinfontein, is about 30 kilometers (18 miles) from the “Rainbow Nation” capital Pretoria.
South Africa’s first black president, Nelson Mandela, fought tirelessly to reconcile the deeply divided country.
He visited Orania in 1995 and had tea with Verwoerd’s widow. A white tea set they drank from is among the carefully arranged memorabilia in an unassuming white house where Betsie Verwoerd spent her last years.
Outside the church, Ranci Pizer, a 58-year-old former government worker who moved to Orania from Pretoria in December, said she enjoyed having more social interaction with neighbors on the streets.
“It’s a community where I can express myself in my own culture,” he said.
A short drive up the hill is a collection of statues donated by people who no longer wanted anything to do with Afrikaner history after the fall of apartheid.
“Afrikaner history is almost criminalized,” said Joost.