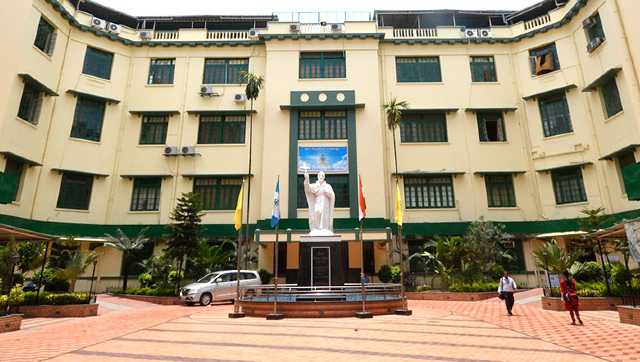 In a state, city and society that prides itself on being ‘progressive’ and pro-women, this strange Victorian stance from one of its most coveted educational institutions is very hard to swallow.

The institution has threatened to file a Rs 99 million libel suit against the sacked assistant professor. Image courtesy of St. Xavier’s College (autonomous)

The facts of the case, at least as far as the public knows, are mind-boggling. A private charter university in Kolkata apparently willing to shell out Rs 10 crore (Rs 9.9 crore, to be precise) to file a Rs 99 crore libel suit against a former assistant professor who had worked there for less than three months. That’s what the court fees cost: 10 percent of the amount requested as damages. So the former junior scholar’s transgressions must be quite egregious.

But are they? She had posted photos of herself in a “swimsuit” and gym clothes in a story of hers on her private Instagram account a couple of months before she entered college. So the photos should be gone in a day. Instead, a student’s father caught him looking at them months later and complained to university authorities, who brought the teacher before a panel. They showed her the photograph, criticized her, questioned her and forced her to resign.

She filed a complaint a few days after resigning in October about how the photos were leaked and distributed, but waited in vain for the Kolkata police to investigate and file an FIR. Finally, in March she sent a legal notice to her former employers, and they responded by demanding that she apologize or face a 99 million rupees libel suit. Suddenly, after an incredible 10 months, this incident has surfaced in the public domain. But why did it take so long to come out?

There are question marks over the behavior of many of the characters in this sordid blackboard saga: the voyeuristic student, his sanctimonious father, the sanctimonious university authorities who questioned the professor, the not-so-curiously uncaring Calcutta police officers. and last but not least, the West Bengal media who mysteriously didn’t know about this matter all this time. And after the news, the silence of the ‘liberals’ of Bengal is also inexplicable.

The student was probably not the only one who saw those suspiciously obtained and distributed private photos, but no one else raised a red flag on the matter. A strange complicity. None of the students felt anything was wrong when their teacher suddenly moved up and left just three months after joining. Or did everyone feel it was the right thing to do: fire a teacher for something she did in her spare time and on a private platform? Could Bengal’s Generation Z be so antediluvian?

The student’s father lives in a time warp. He thinks his college-going son had never seen women in bikinis until those photos were leaked and innocently believed until that fateful moment that female teachers had no life beyond college. The father, an alumnus of the original ‘prestigious’ university, not the newer university, as does the assistant professor, also presumably believes that work clothes for female academics (and leisure clothes too) have not changed from 20the century.

The university authorities are obviously on the same page as the father. In fact, they’re probably stuck in their mid-20s.the century, not even in its last decade. They thought this working woman with a Ph.D. should have consulted her mother before wearing bathing suits, a bikini, or a jumpsuit. In a state, city and society that prides itself on being ‘progressive’ and pro-women, this strange Victorian stance from one of its most coveted educational institutions is very hard to swallow.

Even more difficult to understand is the silence of people who take those very aspects of Bengali society that distinguish it from the supposedly regressive north of India. Ordinary citizens, many of them parents, have been outraged by the young teacher’s ordeal, but the deans (and deans) of West Bengal society and politics have been curiously reticent. They have not demanded an explanation from the university for their actions nor have they expressed support for the teacher.

However, the inaction of the Kolkata Police since last October is not difficult to understand. Ten years ago, when the late Suzette Jordan tried to file a complaint about her being gang-raped by four men in a car on Park St, she was laughed at by local police. It took a media storm for them to investigate the case, and the female officer who cracked it was transferred. The smears against Jordan came from everywhere, showing the seedy underbelly of Calcutta’s ‘bhadralok’ society.

When Kolkata society once again seems unsympathetic to the plight of a woman, a laid-off teacher (a legally appointed one too, not through the scam-tainted process currently claiming scalps among politicians and officials), one cannot wait that the police be proactive. Even though this happened at a university linked to a college attended by many of the city’s luminaries and their progeny, the full 10-month blackout over this incident seems even more unnatural.

How come the media didn’t find out what was going on at the university? In my day, college and police reporters kept their ears peeled; today they evidently depend on handouts. So, the Kolkata police were under no pressure to investigate the assistant professor’s complaint. Even a letter from the National Commission for Women was easily ignored, presumably because its boss has indicated appreciation for government officials who scoff at the New Delhi consultations.

Most curious of all, however, is the demand for Rs 99 crore with which the university is threatening the dismissed academic professor. On one level, this staggering amount indicates that the university admits that its ‘image’ has taken a beating from this incident that came to light. On another level, it also targets very deep pockets, although as a trust-run institution, its governing body should ideally spend those large sums of money on more Christian good deeds.

Interestingly, in 2019, a literature teacher in the Siberian city of Barnaul was fired for photos on social media of her in a bathing suit and mini dress. It all sounds eerily similar. There, too, a parent — a mother — complained to the director about those photos, who in turn demanded the teacher’s resignation, alleging that she had dressed “like a prostitute.” But the reaction was markedly different from what has been happening in progressive Calcutta.

In solidarity, teachers across Russia uploaded 15,000 photos on social media of themselves in swimsuits, most of them much more revealing than the Siberian teacher was fired, with the hashtag #TeachersArePeopleToo. That prompted the education minister to offer him a new job at a training school: formulating a course on the “risks and positive aspects of communicating on social media” for teachers, students and parents. Bengal should do the same.

The author is a freelance writer. The opinions expressed are personal.