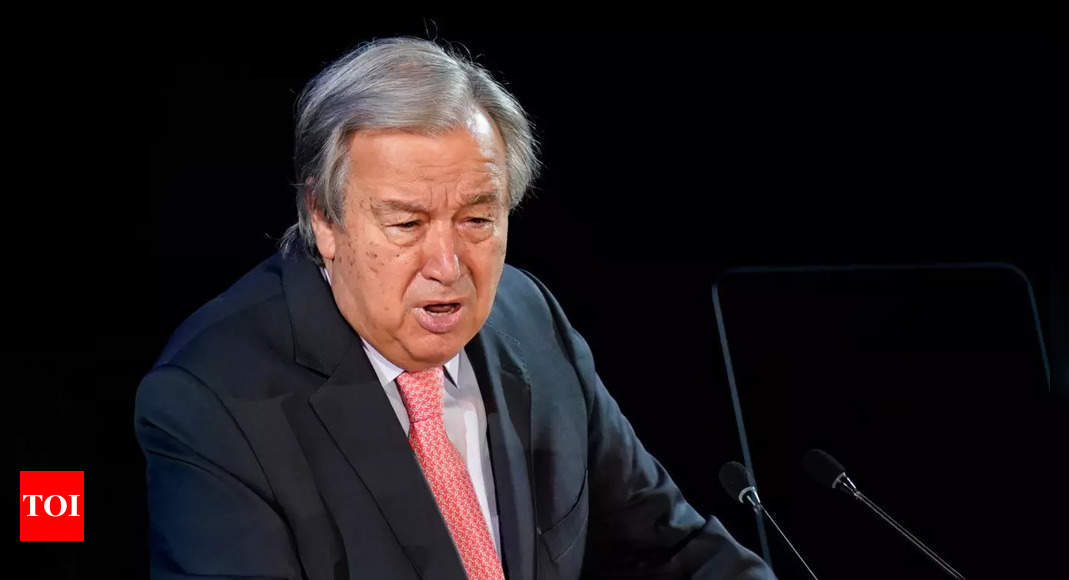 NEW YORK – As India assumes the presidency of the G20, the world is counting on her to mobilize credible action to deliver on the 2030 Development Agenda and the Paris Climate AgreementUN Secretary-General Antonio Guterres said on Saturday.
In his message to a special ‘[email protected]’ event on ‘Showcase India-UN Partnership in Action’, the UN chief underlined that as home to the greatest generation of young people in history, India will be decisive in the success of sustainable development. Goals (SDG).
“Looking ahead, India, home to the largest generation of young people in history, will be instrumental in the success of the Sustainable Development Goals, and reiterating to Prime Minister Modi: as you reform, the world is transformed,” Guterres said.
The event here was organized by the Government of India and the United Nations to highlight India’s partnership with the UN, its South-South Cooperation, its development journey and achievements in the 75th year of its independence.
It was held on the sidelines of the high-level session of the UN General Assembly and was attended by UN dignitaries, including the President of the 77th session of the UN General Assembly, Csaba Korosi, UN Deputy Secretary-General. Amina Mohammedthe Minister of Foreign Affairs of the Maldives, Abdulla Shahid, and the UNDP Administrator, Achim Steiner.
Mohammed, while delivering Guterres’ message at the event, said that as India assumes the G20 presidency, “we are counting on you to mobilize credible action to deliver on the 2030 Agenda, the Addis Ababa agreement and the Paris Agreement.” .
Guterres said in his message that over the past 75 years, India has made remarkable progress in equitable and sustainable development, lifting more than 270 million people out of extreme poverty and becoming the world’s fifth largest economy. He said that all sectors of society have been positively affected, including health, education, food security and climate change.
Guterres said the world is fast approaching half of the time available to achieve the SDGs.
“However, we must be honest that the progress of our assessment is in jeopardy. Even the most fundamental targets on poverty, hunger and education are being reversed and we can see consequences everywhere, from escalating climate chaos and humanitarian emergencies to rising inequalities and injustices,” he said.
The UN chief called on the world to change course, adding that the 2030 Agenda for development remains “our compass to guide us” towards a more peaceful and prosperous future that leaves no one behind.
“We need to act together in solidarity with greater ambition and urgency, and we must act in partnership between governments, civil society, the private sector and from the global to the local level,” he said.
He noted that rooted in a shared belief and multilateral solutions, the India-UN SDG partnership is a “powerful example” of cooperation that “we can move forward”.
Mohammed, in his personal remarks, said that India has been inspired by its diverse society, energized by its young population, strong democracy and women in peacekeeping.
He said the huge and growing potential to transform the world, the scale and pace of growth chart a path for others to follow.
“Transformations and food systems, sustainable energy, connectivity and health are going to be the key opportunities to deepen the alliance. The current crisis that we have, whether it is the recovery from COVID or the climate crisis, or the impacts of the Ukraine war, we have never been more gifted and capable of facing those crises together,” he said.
A concept note shared ahead of the event said that as a founding member of the United Nations, India strongly supports the purposes and principles of the UN.
India’s deepening engagement with the United Nations is based on its strong commitment to multilateralism and dialogue as the key to achieving shared goals and addressing common challenges.
The UN-India Development Partnership Fund is the first single-country South-South cooperation initiative at the UN.
Launched in June 2017, this $150 million Fund supports South-led, South-owned demand-driven sustainable development projects with a focus on LDCs, LLDCs and SIDS.
The dedicated facility is managed by the United Nations Office for South-South Cooperation (UNOSSC). In the last five years, the Fund has accumulated a portfolio of 66 projects in 51 countries.
From supporting a project to prepare a Convention Center in Palau to host the Ocean Conference, to rehabilitating hospitals in Antigua and Barbuda and Guyana, building a school in Dominica, an Information Technology Center of Excellence in Papua New Guinea, and developing the women’s ability. To stop desertification in the Kanem and Lake Chad regions, this Fund is directly impacting the lives of communities throughout the developing world.
An important aspect of India’s leadership in climate action is turning national action into an international collaboration.
India is helping to ensure “access to affordable, reliable, sustainable and modern energy for all” through initiatives such as the International Solar Alliance (ISA), which was formed at CoP21 in 2015 in Paris.
Over the years, ISA has helped ensure energy security and sustainable livelihoods by providing poor communities in developing countries with access to natural, economic, human, and social capital.
The UN granted ISA multilateral treaty status in December 2017 and it now has more than 100 members.
At CoP26 2021, India and the UK announced the One Sun One World One Grid initiative, the first international network of globally interconnected solar power grids that will combine large-scale solar power stations, wind farms and grid-to-grid community and rooftop solar for a reliable, resilient and affordable supply of clean energy.
India is also a founding member of the Coalition for Disaster Resilient Infrastructure (CDRI), which is an association of national governments, UN agencies and programs that aims to promote the rapid development of resilient infrastructure to respond to the imperatives of disasters. Sustainable Development Goals to universally expand access to basic services, enabling prosperity and decent work.